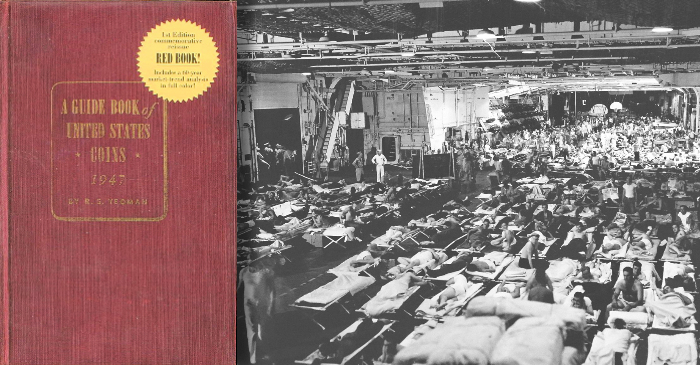 The following coins are for sale — prices firm, cash on the barrel head:

Seems like a no-brainer! I might as well ask, “How would you like to rotate your tires and fill up your tank, and as a bonus, you get a brand-new Lamborghini?” 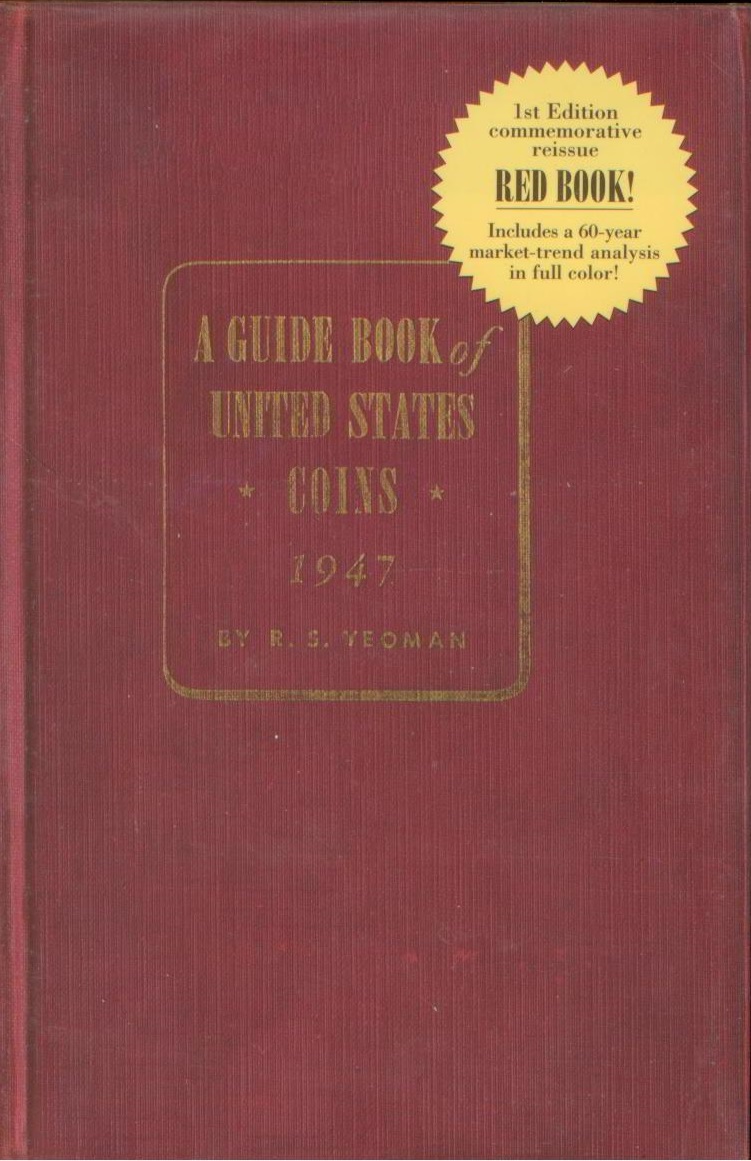 The cover of the 1947 Tribute Edition of the Red Book. Whitman also published a limited-edition (500 copies) leather-bound version. Hover to zoom.

Grab a copy of the 1947 Red Book, the first edition of the Guide Book of United States Coins. Then hop in your trusty time machine, and you can go back to find these prices in the rare-coin market of 74 years ago. 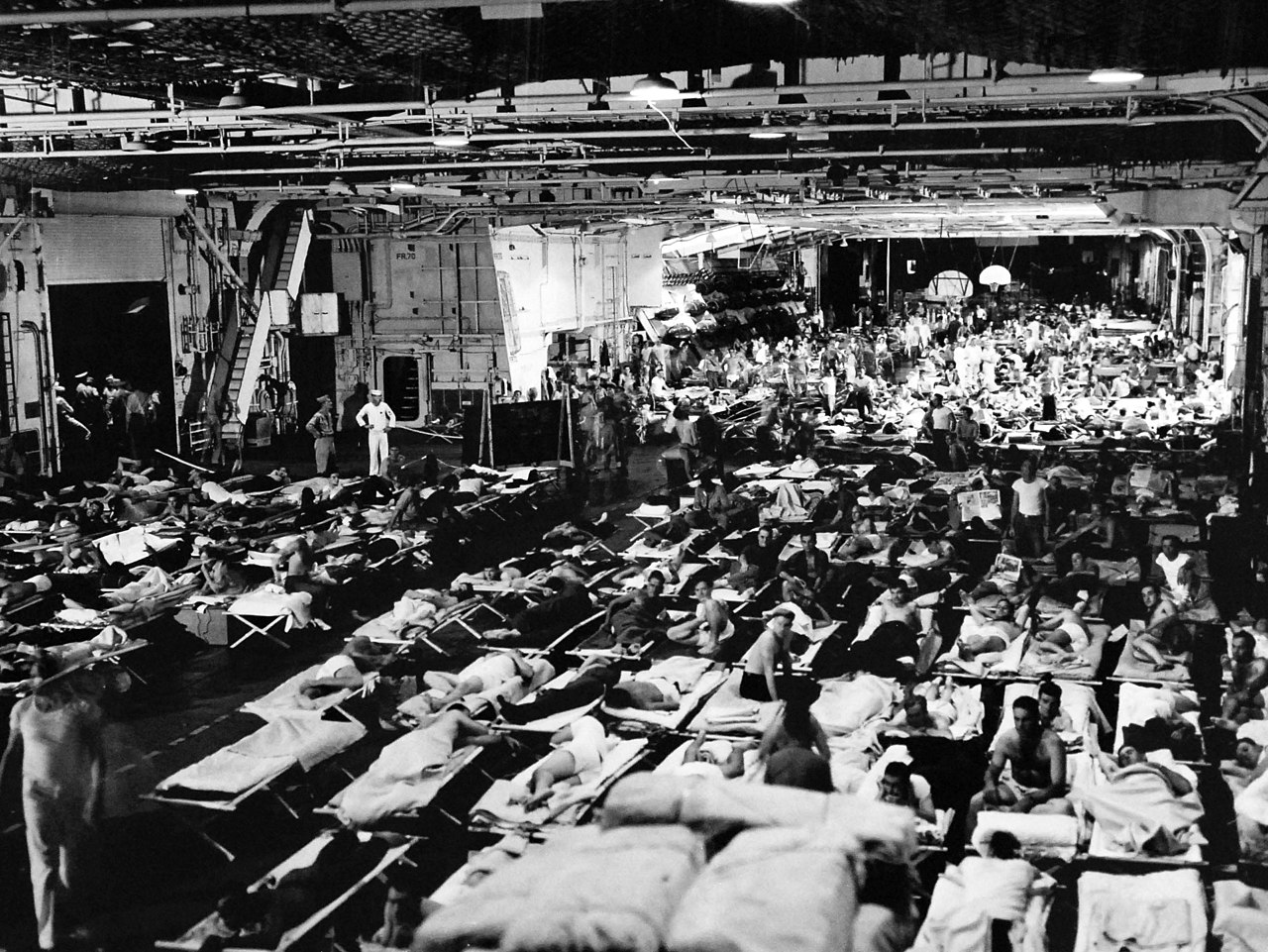 Veterans in the hangar deck of the U.S. Navy aircraft carrier USS Enterprise (CV-6), in Pearl Harbor, September 1945—on their way home as part of Operation Magic Carpet.

Imagine the year is 1947. World War II has been over for some time, and America’s economy is booming. The military mobilization that helped the Allies win the war has since repatriated millions of Americans: in Operation Magic Carpet, running from June 1945 to September 1946, the War Shipping Administration brought eight million service members home from Europe and the Pacific and Asian theaters. Now, back in the States, demand is much greater than supply for many consumer goods — but manufacturers are happy to meet the challenge! Young couples are temporarily moving in with their parents while homebuilders hustle to ramp up the amount of available housing. (The average cost of a new home? $6,600, or about two-and-a-half times the average yearly wage.) With the war over, federal expenditure is markedly down — comparing 1944 and 1947, government spending at all levels has dropped 75 percent — but U.S. citizens are spending more than twice as much on durable goods, overall consumption is up nearly 25 percent, and private investment has more than doubled. 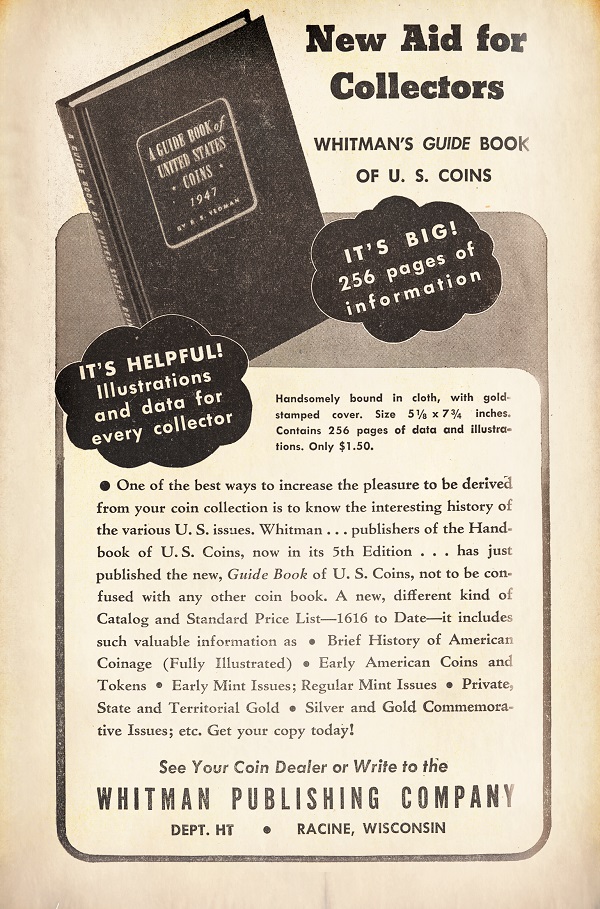 A Revolutionary New Book for a Fast-Growing Hobby

In the midst of all this economic growth and personal spending, Whitman Publishing finally debuted a new hobby reference that had been delayed by wartime paper rationing. It was in November 1946 that R.S. Yeoman’s Guide Book of United States Coins — a retail-pricing version of the popular wholesale-market Handbook of United States Coins — made its first appearance. Now collectors had an annual guide to how much professional dealers were charging, on average, for every coin produced since the start of the U.S. Mint in 1792.

The first print run of the Red Book’s first edition totaled 9,000 copies. These sold so quickly that another 9,000 were printed in February 1947.

By 1959 collectors were buying more than 100,000 Red Books annually. The 1965 (18th) edition reached a peak in sales of 1,200,000 copies. The hobby market was going gangbusters, and that year the Red Book was ranked fifth on the list of best-selling nonfiction titles — ahead of Dale Carnegie’s How to Win Friends and Influence People (at no. 6) and John F. Kennedy’s Profiles in Courage (no. 9). 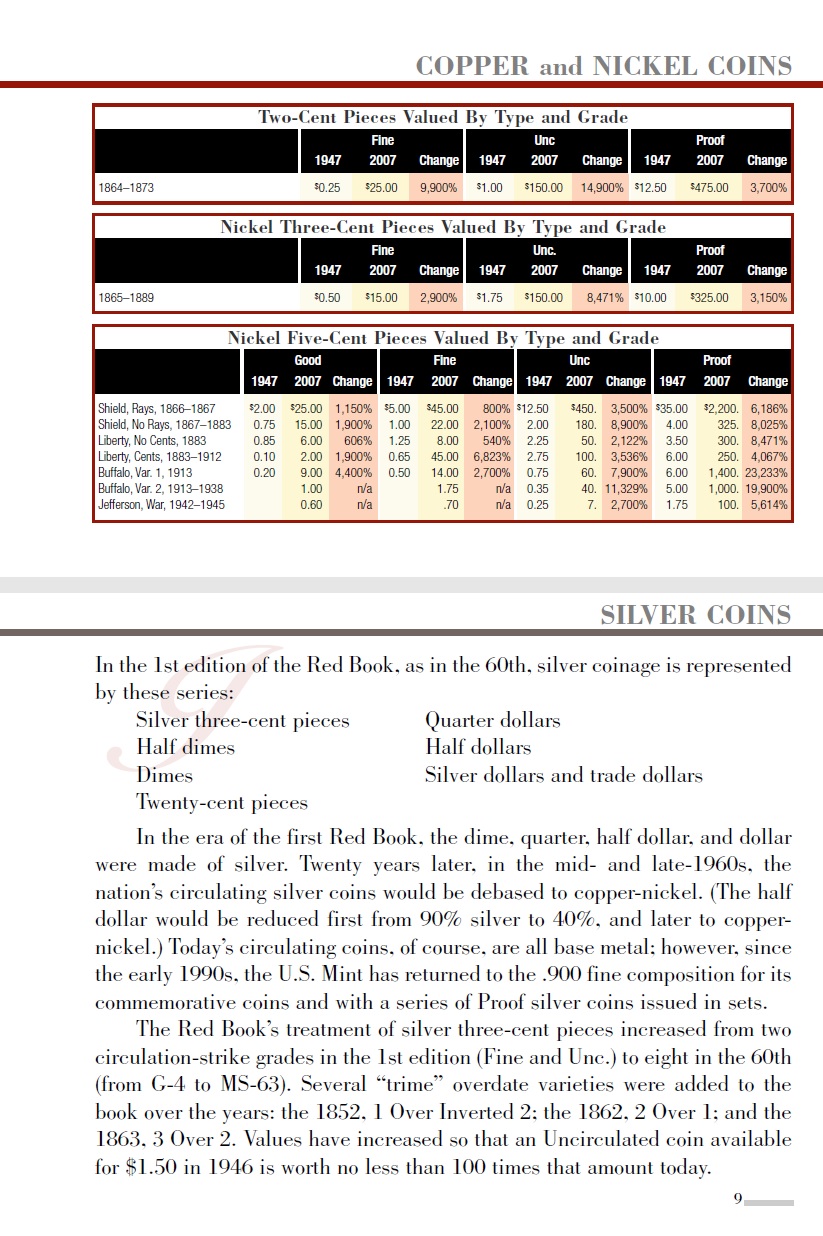 Sample page from the color market-analysis section of the Tribute Edition.

A Tribute to the Red Book

Perhaps even R.S. Yeoman couldn’t have imagined that today, with the Red Book in its 74th edition, collectors would have purchased well over 24 million copies. The guide book is a superstar of America publishing, one of the most popular nonfiction titles of all time. It’s even attained collectible status itself, with many hobbyists adding the latest hardcover to their collections each year. As with rare coins, supply and demand come into play: today an original copy of the 1st edition can command $1,200 to $1,500.

The 60th anniversary of the first Red Book was a fun year for Whitman Publishing; we debuted some great titles in 2006. The one that captured collectors’ imaginations the most might have been the 1947 Tribute Edition Red Book. This was a page-by-page exact recreation of the very first Guide Book of United States Coins. It also included a full-color section comparing the current hobby market with that of the 1940s.

This is where our wishful thinking for a time machine comes in. Just take a look at those 74-year-old coin prices!

Today, if you’re not picky, $5 will buy you a fast-food lunch. In 1947 it would get you an early-1800s Draped Bust quarter in Fine, or an Uncirculated Flying Eagle cent from the 1850s.

A collector who wanted to buy one of every coin and set valued in the first Red Book would have paid $167,970 for a circulated collection, or $219,609 in Mint State. In today’s market that would require more than $11 million and $45 million, respectively. 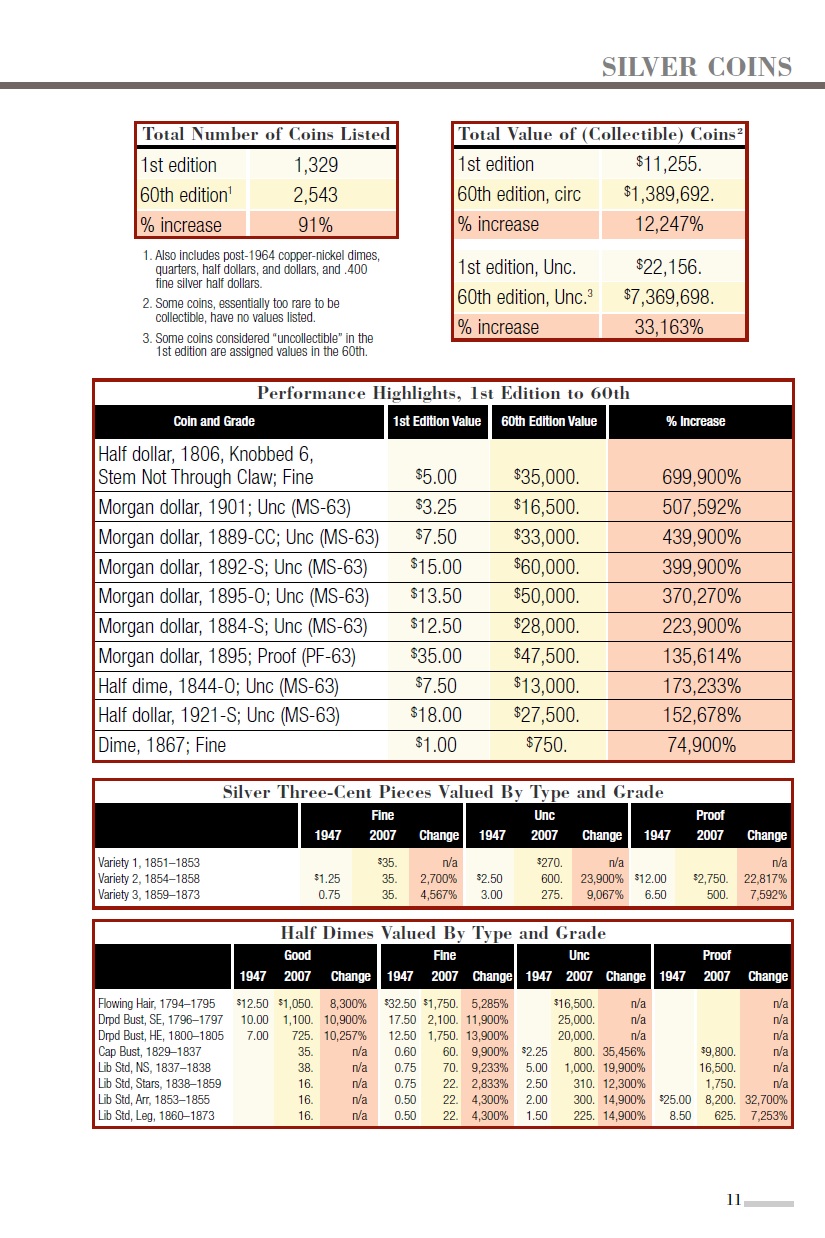 Sample page from the color market-analysis section of the Tribute Edition.

One hobbyist who bought a copy of the 1947 Tribute Edition Red Book looked up a few favorite coins, and then, as he put it, “paged through to look and sigh over prices that are similar to or less than my son’s allowance.” Another wistful reader said, “It’s like time travel. $50 Pan-Pac Octagonal for $500 . . . I’ll take a whole roll, please!”

No matter which U.S. coins you collect, there’s much to learn by comparing today’s hobby with the hobby of yesterday. Plus it can be a heck of a lot of fun. Just don’t let it frustrate you too much. . .($3.75 for an Uncirculated 1909-S V.D.B. cent?!)