The obverse features the coat of arms of the Bank of Mongolia, below, in Cyrillic script, 1000 Togrog, and in the exergue in Latin script MONGOLIA 2 oz .999 SILVER.

The reverse depicts the apple blossom egg by Peter Carl Fabergé in high relief; the background partly imitates the egg’s pattern. In the upper field is 1846-1920 / Peter Carl Fabergé, and in the field below, 2020 / 100th Anniversary. 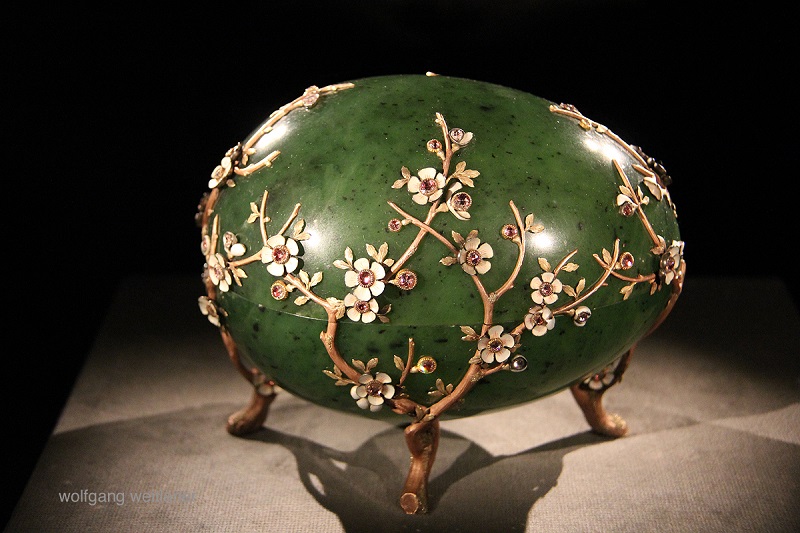 CIT Coin Invest issues a commemorative coin on the occasion of the 100th anniversary of the death of Peter Carl Fabergé featuring one of his most famous works, the apple blossom egg, which is kept in the treasure chamber of the Liechtenstein National Museum. It is probably the biggest Fabergé egg and was created on behalf of Fabergé’s patron, Alexander Kelch, in 1901. The jade egg was used as a jewelry box and is ornamented with blooming apple tree branches made of gold, enamel, and diamonds, which is the reason for its name.

CIT Coin Invest applied numerous state-of-the-art minting techniques to depict the apple blossom egg perfectly true to the original. Thanks to smartminting technology, the egg arises three-dimensionally from the Prooflike surface. Branches and blossoms were designed with a great love for detail. Delicate coloring imitates the original work’s enameled apple blossoms. It is exceptionally demanding to apply the partial gilding that makes the branches shine with a gold luster like the original piece of art.

Today, experts all around the world consider Fabergé eggs to be a highlight of Russian jewelry art. They are objects made of the finest materials and designed with masterly skill for a single purpose: To present beloved persons with them at Easter. This Russian custom was exercised by the entire population. Whereas simple farmers made do with self-dyed eggs as gifts, wealthy citizens and noblemen already started in the 18th century to use symbolic eggs made of wood, porcelain, or metal as presents. In 1885, the first Fabergé egg was created on the commission of Tsar Alexander III. This product became a bestseller whose myth continues to fascinate people to this day, even though we only know where 49 of the eggs are currently located.

You can see the original apple blossom egg in the treasure chamber of the Liechtenstein National Museum here.